How do you judge my book by its cover? #OneMoreArabianNight #OMAN #bookrelease #BeingAuthor

Here is an exclusive look at the full paperback cover, designed by yours truly :)
Let me know what you think... 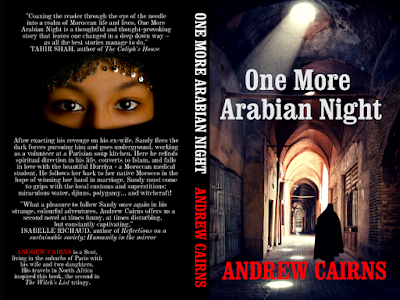 PS If you prefer the kindle edition, you can read it free on kindle unlimited (free 1 month or 3 month trial on https://www.amazon.co.uk/kindleunlimited)

Posted by Andrew at 9:13 AM No comments:

The paperback version of One More Arabian Night: Book II in the Witch's List Trilogy is now available for purchase on amazon!

It has been endorsed by two critically acclaimed authors :

"Coaxing the reader through the eye of the needle into a realm of Moroccan life and lives, One More Arabian Night is a thoughtful and thought-provoking story that leaves one changed in a deep down way – as all the best stories manage to do."
TAHIR SHAH, author of The Caliph's House

"What a pleasure to follow Sandy once again in his strange, colourful adventures. Andrew Cairns offers us a second novel at times funny, at times disturbing, but constantly captivating."
ISABELLE RICHAUD, author of Reflections on a sustainable society: Humanity in the mirror

Posted by Andrew at 1:08 PM No comments:

Posted by Andrew at 9:52 AM No comments:

Happy Easter Monday!
Hope everyone is having a great long weekend.
My news is that One More Arabian Night: Book II in The Witch's List Trilogy has now been submitted for ebook publication on amazon! It should be available for purchase within 3 days! 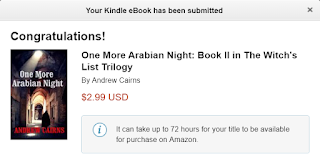 The paperback should also be released shortly.
Happy reading!
Posted by Andrew at 5:12 AM No comments:

It all started off in the school library... #thewitchslist #schoollibrarymonth #BeingAuthor

There's always that one book. In our school library, it was 'Witches and Warlocks'. Find out a bit more about that in an excerpt from The Witch's List below. Enjoy and let me know what you remember about your school library.

As for Saint Saviour's, it was demolished - including the library - in 2010. This is all that's left of the place : 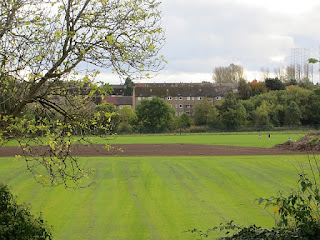 
I didn't use to believe in witches. Not really. Of course, growing up in Scotland, there were always stories of witches and wizards, ghosts and ghouls, monsters and zombies and so on, but as in most ‘civilized’ western countries, such stories were mainly regarded as folklore; on a par with pixies and elves. You didn’t really believe in them, they were just fairy tales. Remember the stories?
There was one, more ‘serious’ book on witches in our secondary school library though. And it freaked us all out a bit. It must have been one of the most browsed texts in there – due to its filthy pictures of witches performing various ceremonies – black masses and the like – naked! In most libraries there are some books with scuddy pictures, classed under erotic literature or art; even in the children’s section there’s always some big kid that’s got his hands on the encyclopaedia and invites you over to show you a picture of the topless, tribal African woman. This one, ‘Witches and Warlocks’, was a non-fiction work, detailing very graphically, and very sexily we all thought, a range of witchcraft and black arts practices. It had somehow found its way into Saint Saviours’ RC (Roman Catholic) school, despite the establishment being as staunchly Catholic in its syllabus and overall culture as it comes. It was in the reference section, on the religious books shelf, and I’m sure none of the teachers knew of its existence, much less its saucy content. The librarian was a rather dozy woman in her thirties, with short blond hair; always had her nose in some novel. I assume it was her that ordered a copy. She must have done it absent-mindedly, not really checking out its profane and pornographic content. Or maybe she was some kind of closest anarchist or rebel. Who knows?
My best friend at the time, Martin Cardosi, always one to lead me into mischief, showed me the book at one point; we must have been in second year, aged thirteen, hormones beginning to rage.
“Here, Sandy, come and check this out.” He shoved the big tome into my hands.
I flipped through it, speechless, mostly just looking at the shocking pictures but taking in some of the vocabulary: black mass, pentagram, hex, coven, sect, orgy…
“I’d like to join one of those devilish sects, just to take part in the orgies,” said Martin, grinning.
“Idiot! You’d probably go to hell.”
After we’d had our fill of the images, Martin put the book back on the shelf and said, “Don’t forget to touch the Bible after, just to be on the safe side.”
We both touched the Bible before leaving.
From then on we secretly consulted the book, at least once a week, hiding behind one of the shelves and ogling at the pictures.

The first class of the afternoon, Maths, went as usual, but halfway through the second class, English, there was a note passed round to all the teachers and everyone was convoked to the hall for an emergency assembly. When we got there the place was packed; all the teachers and pupils were present, as was the librarian, who for once looked emotional and agitated. Martin and I looked at each other uneasily. He put his index finger to his lips. Of course, I wasn’t going to say anything. It was a golden, universal rule we’d learned since primary school; never grass, and especially never own up to anything if you know what’s good for you.
Miss Gruffy, the assistant-head led the proceedings. She had a formidable presence, despite being only about five-foot-two. Greying hair cut short, icy-clear blue eyes which no one dared look into for more than an instant, built like a bus – not fat just solid, matriarchal I suppose you might say. She’d been a missionary nun in Africa in the sixties and seventies, no doubt striking fear into the hearts of any cannibal tribes who dared defy her. She’d been awarded an MBE no less, before leaving the cloth and taking on a new mission: trying to keep us lot on the straight and narrow.
She held up the charred remains of ‘Witches and Warlocks’, holding it at the extreme corner between her thumb and forefinger, as if it was some filthy rag; I suppose it was in her eyes, both literally and figuratively. “Who’s responsible for this?” she boomed, and then looked round the assembly hall, trying to detect any sign of someone who might know something. We all kept our eyes down and remained mute. She let us stew in silence for a good two minutes, before eventually saying, “Fine. No one’s going to own up. The library’s closed for the next two weeks.”
She dramatically dropped the scorched volume into a wastepaper bin, which had obviously been put up on the stage beside her for this sole purpose. She looked out at us again and finally thundered, “God is not mocked!” Clutching the Bible – I’m sure it was the one I’d discarded previously up in the library, she glared at as for a few more instants, then strode furiously off the stage.