This weekend, I'd like to present the work of another author who is widening people's knowledge of other cultures and practises through her travel writing. Jennifer S. Alderson worked as a journalist and website developer in Seattle, Washington before trading her financial security for a backpack. After travelling extensively around Asia and Central America, she moved to Darwin, Australia, before finally settling in the Netherlands.
Jennifer’s travels and experiences colour and inform her internationally-oriented fiction. Her novels, Down and Out in Kathmandu: adventures in backpacking and The Lover’s Portrait: An Art Mystery, transport readers to Nepal, Thailand and the Netherlands.
Her travelogue, Notes of a Naive Traveller: Nepal and Thailand, is a must-read for those interested in learning more about, or wishing to travel to Nepal and Thailand.
The following is a short article by Jennifer, which will hopefully whet your appetite to read more of her fascinating writing... 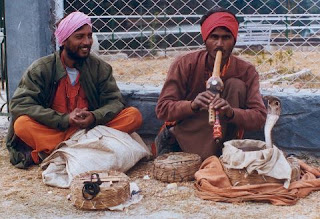 I am fully aware the meat so nicely packaged up in grocery stores comes from living animals that have been slaughtered. I am one of those people who doesn’t mind, as long as I don’t have to see it happen.
In Nepal, ‘fresh meat’ means recently butchered. While volunteering as an English teacher for three months in Kathmandu, I witness several meals being prepared; their heads cut off with a single swipe of a khukuri before their carcasses were cut up, usually on our rooftop terrace. I have even eaten a cake made of congealed fresh goat’s blood, a delicacy prepared for my Nepali father’s birthday. How could I refuse?
As a city girl eating ‘fresh meat’ was an entirely new experience for me, as were most things I encountered while in Nepal. I wrote about these experiences and many more in my newly released travelogue, Notes of a Naive Traveler: Nepal and Thailand. Here is an excerpt, my account of Dashain, one of the most important Hindu festivals during which locals offers sacrifices to the bloodthirsty goddess Kali – in the form of one-thousand and eight animals.
I have never seen so much blood in all of my life!

Excerpt from Notes of a Naive Traveler: Nepal and Thailand:

Today Tammy, Lorie and I went to Dakshinkali to witness the big blood festival of sacrifice. This was simply one of the most powerful and somber events I have witnessed. When I see dead animals in the streets, I have a hard time looking. But the dead animals at Dakshinkali were serving a higher purpose. Somehow this made seeing be-headed goats, ducks and chickens simultaneously easier and more difficult to watch.
People would enter the temple proper with an animal, get it blessed at the shrine then step to the right and get in line. A middle-aged man in a ratty T-shirt and jeans was the ‘khukuri master’ who did the killing. He grabbed the animal’s neck and sliced its head off (always with one stroke of the knife otherwise it’s not considered pure), usually while chatting with friends. Depending on the animal’s size he would grab a small butcher-knifed sized khukuri, or a longer saber-like one. For the goats, the animal’s owner would hold it down while he went to work. The most disturbing part was watching him saw at some of the larger animal’s necks before they died. Overall this wasn’t a disturbing or morbid ritual. In fact it all seemed so casual – perhaps that’s why it was so powerful. 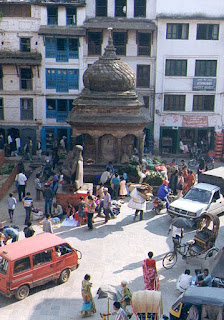 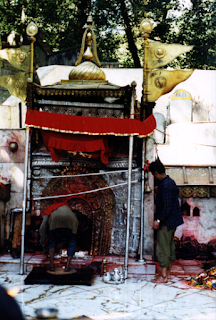 I guess I was expecting a sacred alter surrounded by candles and a high priest wielding a knife. Instead, the sacrifice took place in a corner of the temple and the guy wielding the knife wore a T-shirt and joked with friends between be-headings.
As animals were being slaughtered on one side of the temple, a throng of people were trying to shove their way to the front of the shrine for the blessing. Because this huge crowd was surging inside the temple complex, there was barely any room for the animal sacrifices to happen. I kept waiting for someone to get drenched in blood or slip through a pool of it.
After the khukuri master cuts the animal’s head off, the family hands him money then collects the two pieces. Goat and duck heads were kept, chicken heads discarded. Families would either put the severed head into a bag or their sons would proudly show it off while helping their fathers carry the animal’s carcass to the nearby river. Goats are the most revered – or at least most expensive – so often boys would grip the dead animal’s ears in one hand in order to display their prize, using the other hand to grasp the hind legs.
It took two people – usually a father and son – each holding two legs, to get a goat safely down to the river’s edge. The neck dangled down, dripping blood, which marked a path across the steps and bridges leading from the temple to one of the two holy rivers the Dakshinkali temple straddles. There the animals are washed, turning the water in both rivers red.


Goats were disassembled, parts cleaned and saved for later. Some families put chunks of meat into fire pits or large metal barrels and cooked them immediately, others bagged all the pieces up for later. Heads were kept intact so they could be offered to other temples. I’ve been told that blood from each animal will be saved then sprinkled onto cars, shovels, tractors, tempos, garages and the like. The blood of a sacrificed animal is considered good luck for vehicles or tools, bringing safety and prosperity for the next year. That’s why every Royal Nepal Airplane has a goat sacrificed to it. 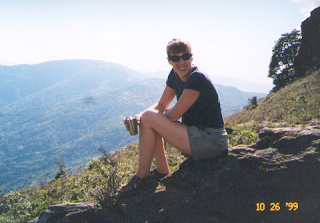 Writing the follow-up to The Witch's List, one step at a time.
Am I taking the floor or driving myself up the wall? 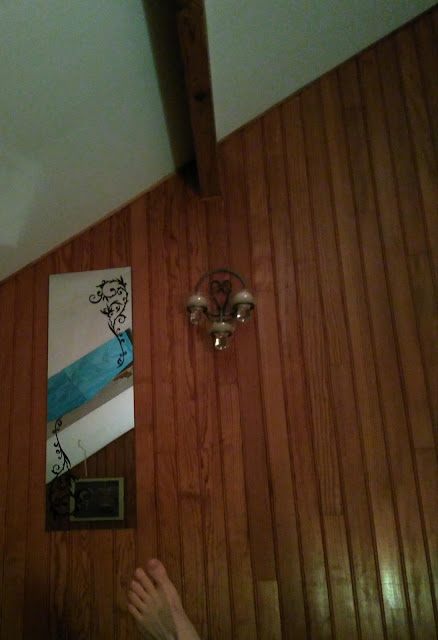 Posted by Andrew at 1:30 PM No comments:

Came across this Algerian restaurant, named l'Oasis. Strange coincidence, since that is the name I gave to the restaurant where some of the action takes place in my new book! 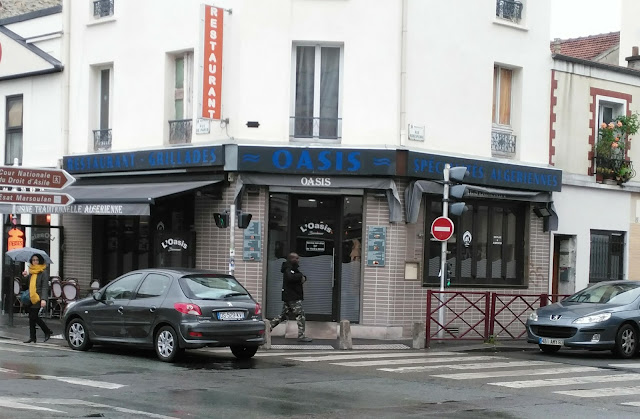