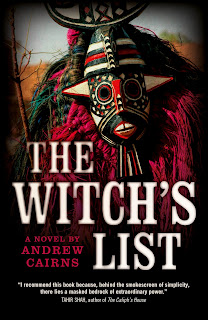 Posted by Andrew at 5:05 AM No comments:

Happy Birthday The Witch's List! 1 year since the novel was published!
And what a year it's been. Signings in shops such as Waterstones, WHSmith, and Le Petit Diable; events in libraries including Dundee, Portlethen, Stonehaven, and The American Library In Paris; articles in The Courrier, City Life Dundee, and Le Villeneuvois magazine. 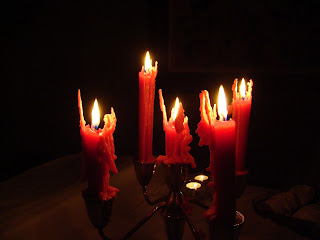 The Catacombs is one of the scariest places in Paris. It is a huge maze of tunnels, and contains the bones of about 6 million people. Enter at your peril, as two adolescents recently found out. They went exploring, entering the underground maze through one of the unofficial doorways and got lost. Search parties thankfully managed to rescue them safe and sound after 72 hours. See story here:
https://boingboing.net/2017/06/15/two-teens-were-lost-in-tunnels.html
http://actualite.20minutes.fr/Interstitial/TwentyMinutes/2017/06/14/5940fbcb168dd.html 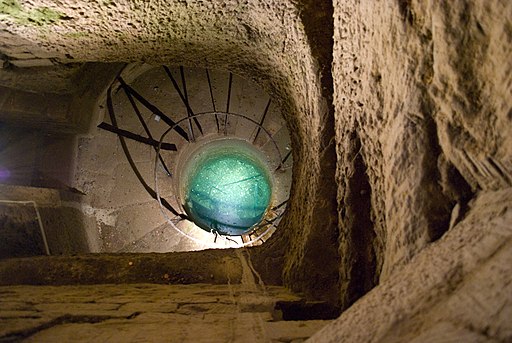 They were lucky, compared to Philibert Aspairt, who got lost in the catacombs in 1793. His body was only found 11 years later.

Here is a passage from The Witch's List, which describes a visit to the Catacombs. Hopefully it will whet your appetite to read the whole novel, or to go on a visit of the place yourself - via the official museum entrance!

Henry proposed a visit to the catacombs on Saturday afternoon.
After a year living in Paris, I’d done all the main sights: Eiffel
Tower, Sacre Coeur, Notre Dame, Louvre, Musée d’Orsay, Centre
Pompidou, Versailles; and some of the lesser known ones:
Marmottan Monet museum, Arab Institute, Musée de l’Homme
and of course Père Lachaise cemetery, where I’d visited the tomb
of the legendary Jim Morrison of the Doors. I’d heard of the
catacombs of course, having read about it in guide books and in
the ‘Officiel’ magazine – a weekly what’s on guide I often bought
for a few centimes. It was described as an underground
necropolis (remember Glasgow!) containing the remains of over six
million people, mostly removed from other, overflowing
cemeteries in the late eighteenth century and early nineteenth. I’d
frankly thought of the place as less of a ‘must-see’ and more of a
‘better to avoid.’
“It’ll be awesome, dude, the biggest necropolis in the world;
creepy underground passageways, like something from an
Indiana Jones movie.” He really talked the place up.
“A collection of peoples’ bones, disrespectfully removed from
their original graveyards, stacked up in dusty claustrophobic
corridors, and put on display for our macabre amusement. It’s
just not right, sacrilegious even.”I replied.
“You know what I think about God and religions.” He’d
already expressed his atheistic views on several occasions.
“Morbid then. Shouldn’t we just let the dead rest in peace?”
“Come on, man, don’t be such a square,” he chided me.
I eventually agreed to accompany him on the visit, despite my
better judgement. At least I got a favour out of him: he gave me
the keys for his room on Friday night, so I could sleep with
Rocky, while he went off to Beverly’s room.
Friday evening, Rocky came for a meal on campus. I took her
to the Spanish house, then we frolicked on the grass – kissing
ever more ardently and rolling on top of each other while the sun
set. Then I took her back to Henry’s room and we made mad
passionate love.
The next morning I didn’t really fancy going back to my room
to face Maria’s accusations. I’d already brought spare clothes and
toiletries to Henry’s room, so it wasn’t as if I needed to go back
right away. Rocky had brought an overnight bag too. So we just
showered, changed and took a walk around campus, before
grabbing sandwiches and eating them outside on the big lawn.
“Got anything planned for the rest of the weekend?” I asked
her.
“Well nothing today, but you know, the usual family Sunday
– church and so on,” she replied.
“Fancy coming to visit the catacombs,” I proposed. “I’m going
with Henry later this afternoon.”
“Ooh! The catacombs – a bit scary, so I’ve heard. Okay, why
not. At least we can hang out a bit longer together today. Then I’ll
probably head back home for dinner with the family.”
Henry met us back at his room around two p.m. and off we
went – it was just one stop on the RER to Denfert-Rochereau.
The visit was just as macabre as I had feared.
We walked down steps until we were twenty metres underground
– into what used to be a stone mine. After a small
museum section explaining the history of the place, there was a
gallery containing sculptures, carved directly out of the stone. I
noted with trepidation that the sculptor – a certain Décure, alias
‘Beauséjour’, which ironically means ‘nice stay’ – was killed
when he attempted to create a stairway to an upper level of the
quarry and provoked a cave-in.
Then we went into the actual ossuary, which had a plaque at
the entrance reading ‘Stop! This is the empire of death.’ Once
inside there were human skulls and bones everywhere, from
floor to ceiling, sometimes ‘artistically’ arranged, other times just
indiscriminately stacked up. There were plaques telling where
the bones were from and when they were inhumed in the
catacombs. For example, ‘Bones from the cemetery of the
innocent deposited in April 1786.’ Other plaques offered quotations
from the Bible, or from famous poets such as Dante and
Desmartin, or ominous warnings. ‘Whichever way you turn
death is watching you,’ was the one that marked me the most, as
it seemed to describe the eerie way in which the skulls appeared
to be staring at us, as we made our way along the passageways.
Henry and Rocky didn’t seem as affected as I was, fingering
the bones and skulls throughout the visit. At one point Henry
even lay on top of one of the stone altars, crossed two tibia bones
over his chest, then hissed in a mock evil tone, “Awaken,
Nosferatu!”
“Cut it out!” I chided him. “Have you no respect for the
dead?”
He just smirked back at me.
Rocky also played the joker at one point, holding up a skull
and quoting from Hamlet, “Alas, poor Yorick! I knew him,
Horatio.”
They both guffawed. I just shook my head and rolled my eyes.
Hopeless cases the pair of them. I was surprised, though, that
Rocky could correctly quote from Shakespeare. Her English was
amazing.
Despite their joking I was glad to get out of the place, the
whole atmosphere weighed heavily on me. At the exit they
actually frisked us down to make sure we hadn’t stolen anything.
There was a little display showing the bones and even a skull that
people had tried to smuggled out.
“What, you mean someone actually tried to walk out of here
with a skull?” I asked the security guy incredulously.
“Yes, you’d be surprised,” he answered.

Posted by Andrew at 4:54 AM No comments:

Around the World in 80 Books! #thewitchslist #goodreads

Go travelling round the world, by reading books! Just joined this cool group on goodreads. The Witch's List gets a mention in the Côte d'Ivoire section!

Around the World in 80 Books's cote-d-ivoire book montage

12437 members Reading takes you places. Where in the world will your next book take <b>you</b>? If you love world literature, travel writing, or exploring the world through books, you have come to the right place! ATW80 began in 2009 as a challenge on TNBBC. The separate group was established in 2011. Anyone can join and participate in the challenges or readings at any time. Challenge participation is not a requirement of joining. Anyone who loves reading books from around the world is welcome here. The main purpose of this group is to travel the world through books, experiencing new authors and cultures along the way. Want to read about the world? We have close to 40,000 books cataloged by setting and more are added each month.
"The more that you read, the more things you will know. The more that you learn, the more places you'll go.” - Dr. Suess
“There are too many books I haven’t read, too many places I haven’t seen, too many memories I haven’t kept long enough.” ― Irwin Shaw

View this group on Goodreads »
Posted by Andrew at 10:40 AM No comments:

Summer is coming! Pack a copy of "The Witch's List" in your travel bag! #thewitchslist #summerreading

Summer is officially here in 20 days! If you fancy a great book to read while travelling or loafing around on the beach, then grab a copy of The Witch's List for your holidays. There are some great offers on the net such as paperback for $2.53 on amazon:
https://www.amazon.com/Witchs-List-Andrew-Cairns/dp/1785353489
Or just buy / order one at your local bookshop.
Happy reading! Bon voyage! 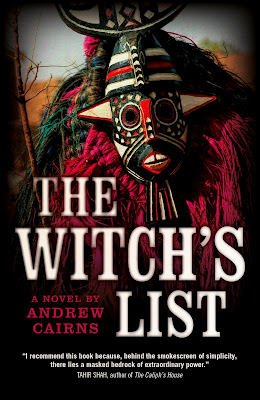 Posted by Andrew at 4:31 AM No comments: